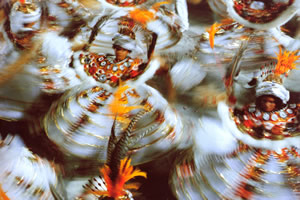 My person would recommend a wonderful and valuable homepage at Advent season, which belongs to the subject area World Cultural Heritage, namely fairy tales from foreign or distant cultures.

In this case it is about African fairy tales, which one of them I would like to introduce in my homepage and I hope that the owner of the mentioned homepage agrees with it.

Free English translation. That German-language fairy-tale you may find here!

The Song of the Colourful Birds

Five birds lived close together in a forest, one had white feathers, so white as the clouds in the sky, the second had flaming red springs, as red as the flowers of the Jacaranda trees, the third had a deep blue plumage, as blue as the sky over Ghana, the fourth had yellow springs, as bright yellow as the juiciest lemons in the trees, and the fifth had green feathers, as green as the leaves in the forest.

Looking after eating, so tell the old people, the birds discovered that with them in the forest lived an old man. He is, so it was said, very generous. So the five magnificent birds stretched out their wings and made their way to him.

When they discovered his small house from above, they began singing their canon: Tse Tse Kule sang one, Tse Tse Kunsa the others, always changing and getting faster and faster.

It sounded like a happy multi-voiced chorus would dance through the air.

„We are brothers and sisters, nobody can separate us, one for everybody and everybody for one.“

The old man was thrilled by the song and showered the feathered friends with best feed.

Thus they came again every morning at daybreak and harvested in appreciation of their beguiling song richly to eat.

However, some day the thought came to the bird with the white feathers: If I am there earlier than the others and sing only, I get the most delightful grains for me alone.

When just the first sunrays glided over the horizon, the white bird alone flew off. When he came to the hut, he began singing Tse Tse, however, it gave no canon, no many-voiced, happy song, but only an unanimous Tse, Tse.

The old man stormed out of the hut to see who made the noise.

He did not recognize the solitary white bird and scared him away.

Only shortly after there came the red bird and began singing his solitary song. Then came the blue bird, the yellow bird and the green bird, everybody tried to beguile for itself alone with his art the old man and everybody was scared away by the old man.

Sad they flew back to their nests. It lasted for a while, until the white bird told about its failure, then the others also reported about their failed attempt.

There only was embarrassed silence, but then all had to laugh because they had been so brainless.

The five decided to sing in future only still together. They started to the old man, finally, everybody had eaten for a long time nothing and was very hungry. The old man was already glad when he saw coming five magnificent birds.

He told them about the „strange birds” which had appeared over his hut and had made thus a noise. So nicely as in this evening the five friends had never sung, they were united again and they had learnt: „ We have only to eat, if we hold together.”